Sports at the Beach: The Best Games to Play in the Sand 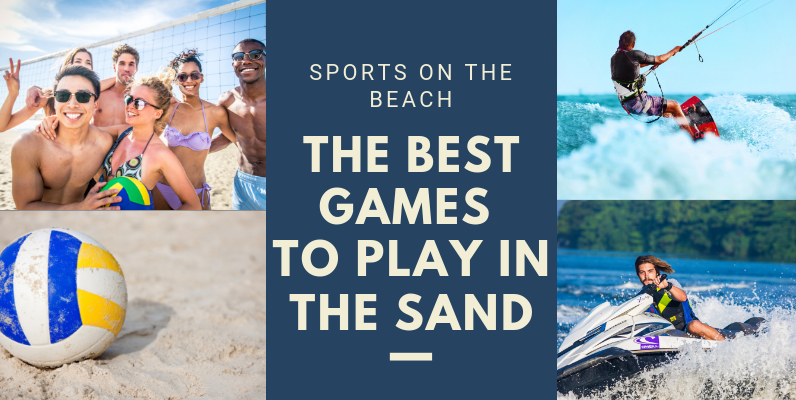 Beaches aren’t just places to sit and soak up the sun. Why not play some sports at the beach? Frolicking around in the sand is fun and exciting, and it keeps the blood pumping, because, let’s face it – sometimes it gets boring. So, rather than lying around doing nothing, why not whip out a ball and get a group of people together? Friends, family, and even strangers (aka soon-to-be-friends) will all work just fine.

Probably one of the most famous and popular sports at the beach is volleyball. Almost every beach in the US has a net for two teams to spike a ball and smash it into the open court. Plus, most strangers are happy to tag along for the ride too, so you don’t need a team of people. It’s an excellent way to get some exercise without overheating as you won’t constantly run around.

Soccer is growing in popularity in the States. Beaches are the perfect places to play because the sand is a readymade pitch. All you have to do is to craft makeshift goals out of spare t-shirts or towels. Although it’s harder – the bounce isn’t reliable and the ball can get stuck – the surprises tend to make it more enjoyable.

Some sports don’t translate onto a sand field; however, football works pretty well on sand. With two lines at either end of a rectangle as the end zones, you can throw the pigskin (or a foam football, for safety if crowded) around for hours. The great thing is that it doesn’t hurt nearly as much when you are tackled. But, if you dislike the tackling part altogether, you can play flag football. Or, if you want to play a safer game with just a ball for equipment, opt for one-hand-touch (easier for defense) or two-hand-touch (harder for defense).

Throwing a disc-shaped object around on a beach is a staple for passing the time. In recent years, ultimate frisbee has been catching on, which combines football with frisbee. With running and diving catches, it’s a lot more active than just throwing a frisbee, and is also a lot more fun with a group. It is possible to play with several people, but all you need is two people per team to get a small game going. To up the ante, take the party into the water.

Spikeball is a newer 2v2 game that involves a small circular net where teams can take turns “spiking” a ball against the net to each other, resulting in hilarious diving attempts at getting the ball back to the net. Getting started with a Spikeball starter kit runs around the $60 mark and includes a net, a ball, and a carrying case.

Of course, if you’d like to move your fun to the water, then Hydroflight, jet skis and boats at PowerUpWatersports are the way to go.